Charlie Bondhus’s second poetry book, All the Heat We Could Carry, won Main Street Rag’s Annual Poetry Book Award for 2013 and the Publishing Triangle’s 2014 Thom Gunn Award for Gay Poetry. Previously, he published How the Boy Might See It (Pecan Grove Press, 2009), and two chapbooks, What We Have Learned to Love and Monsters and Victims (Gothic Press, 2010). His poetry appears in numerous periodicals, including POETRY, Midwest Quarterly, War, Literature & the Arts, The Wisconsin Review, and CounterPunch. In addition to being Poetry Editor at The Good Men Project, he teaches at Raritan Valley Community College in New Jersey. 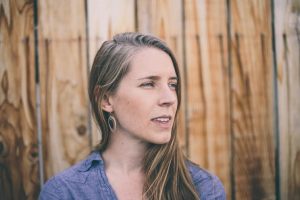 Corrie Williamson is the author of Sweet Husk, winner of the 2014 Perugia Press Prize. Her poems have recently appeared or are forthcoming in The Colorado Review, The Mid-American Review, and The Missouri Review, among other publications. A native of Virginia, she currently lives and teaches in Helena, Montana.

The screen door squeaks
and here you are, in shorts and tank,
bearing iced tea, two glasses,
the books we’ve been reading.

No one else on their porch;
it’s hot, and everything sticks
to everything. Still, we resist
spending this golden day—
the clearest of the year—
behind curtains.

On the sidewalk a dog tugs
the woman after him,
while the mop-headed hydrangea
pulls itself out of the soil,
rising like a rebellious slave
beneath the lashing heat.

The neighbors got used to us
a long time ago, but sometimes kids,
the more observant ones, stare.

The hottest on record since 1895,
say the weather people. A sign
of God’s displeasure,
say the evangelicals.

We stay out of matters
pertaining to history and divine discontent,
reading on the porch and pressing glasses
of iced tea to our foreheads.

THE MOLE, THE SWEET POTATO, AND THE POSSIBILITY OF ALLEGORY / Corrie Williamson

On the table, a heap of sweet
potatoes, holes chewed
through the skin of some.

Wedge of orange meat
where a mole encountered
it underground: star-flesh

at the end of his nose bumping
straight into the subterranean
mother lode, blindly caressing

the tuber with the branched
mitts of his hands, scenting out
its complicated rough contours,

dusky odor of the roots’
snarl, gnawing into the soft
fibers which he can’t know

are the shade of a harvest moon
low on the horizon. He eats
awed, but when he leads

the other moles here to share
the gift, line of them shuffling
in the tunnel, vein teeming with dark

blood toward a heart, there is only
an empty socket, a room whose walls
are soil, faintly fragrant.