Thursday, February 4, 2010, at 7:00 pm, poets Rhett Iseman Trull and Meg Kearney will warm a winter’s night as they read work from their books as well as new poems. ($2-5 sliding scale.) 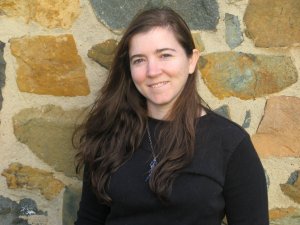 Rhett Iseman Trull‘s first book of poetry, The Real Warnings (Anhinga Press, 2009), received the 2008 Anhinga Prize for Poetry. Her poems and essays have appeared or are forthcoming in The American Poetry Review, Best New Poets 2008, The Georgetown Review, Prairie Schooner, The Southern Review, and other publications. Her awards include prizes from the Academy of American Poets and the Dorothy Sargent Rosenberg Foundation. She received her B.A. from Duke University and her M.F.A. from the University of North Carolina at Greensboro where she was a Randall Jarrell Fellow. She and her husband publish Cave Wall in Greensboro, North Carolina.

Meg Kearney’s first collection of poetry, An Unkindness of Ravens, was published by BOA

Editions Ltd. in 2001. The Secret of Me, her novel in verse for teens, was released in hardcover by Persea Books in 2005; the paperback edition, along with a teacher’s guide, came out in 2007. Four Way Books published her newest collection of poems, Home By Now, in fall 2009. Her picture book, Trouper the Three-Legged Dog, is forthcoming from Scholastic in 2012 and will feature illustrations by E.B. Lewis. Meg has taught poetry at The New School University, and is the Director of the Solstice Creative Writing Programs of Pine Manor College in Massachusetts. She was the Associate Director of the National Book Foundation, sponsor of the National Book Awards, for more than 10 years. Her poetry has been featured on Poetry Daily and Garrison Keillor’s “A Writer’s Almanac,” and has been published in numerous magazines as well as such anthologies as Poets Grimm, Never Before: Poems About First Experiences, The Book of Irish American Poetry from the 18th Century to the Present, and Conversation Pieces: Poems that Talk to Other Poems. She is also co-editor of Blues for Bill: a Tribute to William Matthews. A native New Yorker, Meg now lives in New Hampshire. For more information: www.megkearney.com.

THE STREETS OF MY HEART by Rhett Iseman Trull
for Jeff

What a display. The light chromed off the ornate lamps and signs,
brass bumpers of the Cadillac Sevilles,
spatulas sterling-gripped and forks gold-tined
that swung from every balcony’s smoking grill.
Girls half-undressed came masquerading, frills
on sale to the debonair boys. Parading lines
of pigeons, curbside, puffed like helium-filled
balloons no one saw deflating. The shine
must fade, the city still, to gleam, to escapade anew.
The streets of my heart while sun-licked, well-trafficked, amazed,
hosted a previous traveler or two. But none until you
paused to point out beauty I missed: loves taxiing away;
the saxist on Oak, case open for coins, blue kiss at high-noon;
jay-filled sapling in a slip of leaves, some stenciled to the walk by rain.

(from The Real Warnings. © Anhinga Press, 2009. Reprinted with permission.)

HOME BY NOW by Meg Kearney

New Hampshire air curls my hair like a child’s
hand curls around a finger. “Children?” No,
we tell the realtor, but maybe a dog or two.
They’ll bark at the mail car (Margaret’s
Chevy Supreme) and chase the occasional
moose here in this place where doors are left
unlocked and it’s Code Green from sun-up,
meaning go ahead and feel relieved—
the terrorists are back where you left them
on East 20th Street and Avenue C. In New York
we stocked our emergency packs with whistles
and duct tape. In New England, precautions take
a milder hue: don’t say “pig” on a lobster boat
or paint the hull blue. Your friends in the city
say they’ll miss you but don’t blame you—they
still cringe each time a plane’s overhead,
one ear cocked for the other shoe.